Lord Lucan Used To Beat Me With Cane Before We Had Sex, Widow Shares Intimate Details 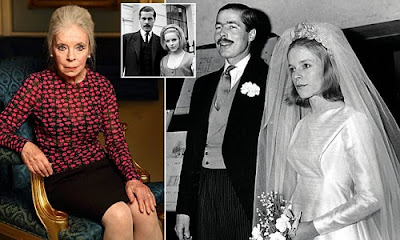 The widow of Lord Lucan has revealed that her husband would beat her with a cane for pleasure before having sex with her.

Lady Lucan describes in a TV interview how she became depressed during the breakdown of her marriage and how her husband would beat her on the bottom with a cane, as he put it, to beat ‘the mad ideas out of your head’.

‘He could have hit harder,’ she says. ‘They were measured blows. He must have got pleasure out of it because he had intercourse [with me] afterwards.’


In an hour-long TV documentary, Lady Lucan describes life with her late husband including their first sexual encounter, the murder of the family nanny and then her estrangement from her family.

Lady Lucan, 79, has not spoken to her three children for 35 years. When asked by the programme’s director, Michael Waldman, if she was a good mother, she says: ‘I could have been better. I did stay in bed rather too often.’

Waldman interviewed Lady Lucan over three days in her Belgravia mews home and at a local hotel.

He tells this week’s Radio Times: ‘I get the sense that she is, to use the language of psychotherapy, in a better place and is feeling that she has a story to tell.

Professional gambler ‘Lucky’ Lucan bludgeoned his children’s nanny, Sandra Rivett, 29, to death in November 1974 with a length of lead piping in the basement of the family’s Belgravia home after apparently mistaking her for his wife.

Lady Lucan was injured in the frenzied attack and later identified her husband as her assailant.

He had moved out of their home and had lost a bitter battle for custody of their children.

After the attack, he drove to a friend’s house in Uckfield, East Sussex, in a borrowed car.

It was later found abandoned with bloodstains inside in the nearby port of Newhaven.

In the ITV documentary Lord Lucan: My Husband, The Truth, Lady Lucan says she believes her husband killed himself.

Lady Lucan is asked about regrets. ‘I am deeply sad that my marriage caused Sandra Rivett to die,’ she says.