See Pastor Who Knocked Down Custom Official, While Trying To Evade Duties Check


A Pastor who was trying to evade duties check, knocks down Customs official on highway in Akwa Ibom State, has left a custom officer severly injured. It was gathered that the officer was knocked down by the Pastor in the incident that happened on Thursday.
According to Premium Times, the man, pictured above, who was later identified as Nsikanabasi Ese, a pastor, and founder of Kairos Rhema Embassy, Uyo, was driving in an SUV along Eket-Ikot Abasi-Port Harcourt Highway, when he was reportedly flagged down by Customs officers at a checkpoint around 10.30 a.m. 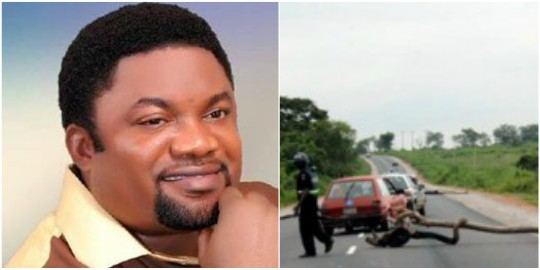 “He (the pastor) slowed down the vehicle, so we naturally thought he was pulling over,” the injured officer, Daneke Emmanuel, told journalists at Immanuel Hospital, Eket, where he was receiving medical attention.
“At the point that we were relaxed, he fired back the engine at full throttle, and before I could dive to safety he had already hit me.” The pastor, Mr. Ese, was said to have sped off after hitting the officer.
"He pulled over the brown colour Toyota Highlander at a short distance along the highway when he noticed that a Customs vehicle was about giving chase.
“He flung open the car door, walked away from the car and then suddenly slumped on the ground as though he was in great pains. As we were about to find out what was wrong with him, another occupant of the car jumped onto the steering and ran away with the car,” an officer said.