A young man, identified simply as Peace, got inflicted with machete cut injuries after he fought his ex-girlfriend’s new lover at Amaoba-Ime, Umuahia area of Abia State.

Witnesses said that Peace and his opponent, Divine Ndudim aka Defence, were rushed to the Federal Medical Centre (FMC), Umuahia, Abia State, after a bloody fight over a lady called Felicity Ogechi. 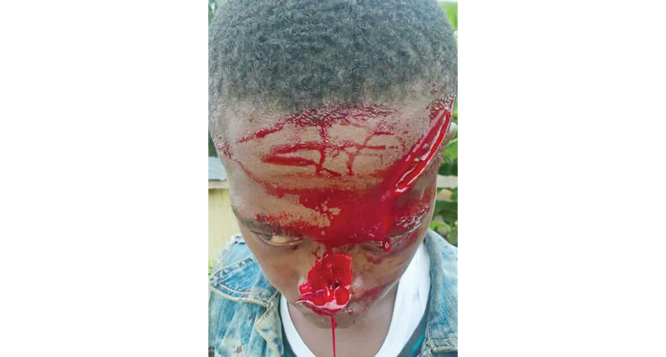 While Peace had his forehead and nose sliced, Ndudim sustained a swollen hand and had internal bleeding.

Witnesses are, however, insisting it was Ndudim’s brother, who attacked Peace with a machete. He was said to have attacked, after witnessing how Peace used a stick to attack Ndudim because of
Ogechi.

The incident has plunged the community, Amaoba-Ime into shock. Some of the elders in the community said that it was a taboo for two persons from the same village to fight and shed blood.

The taboo is called ‘Erim.’ The consequence of that spilling blood is death; if a spiritual cleansing is not quickly carried out.

Peace was Ogechi’s former lover until he turned her to a punching bag. Ogechi borne the beatings until Peace called it quits between them.

It was gathered that several attempts made by Ogechi to start a new relationship always failed because Peace would threaten and sometimes attack every prospective lover.

Ndudim, who just came from Lagos State to the village, saw Ogechi and fell in love with her.

He expressed his feelings for her and she accepted.

The relationship was already beginning to take root, when Peace heard about it and went after Ndudim. Witnesses said that Peace took to attacking and beating Ndudim.

Ndudim bore the beating and humiliation. But on that fateful day of April 22, Peace came to attack Ndudim again, but got more than he bargained for.

A member of the community, who didn’t wish to be mentioned, said he witnessed the incident. He said:
“It was Peace that started the trouble.
He has been harassing Ndudim for long. Peace is a former lover of Ogechi. He used to beat her every day.
He was also the one that told Ogechi that it was over between them. After breaking up with her, he refused to allow any guy to date her in the community.Peace used to harass and threaten any guy that wants to date Ogechi. Peace even threatened to kill Ndudim if he sees him with Ogechi.“On the eve of the fight that led to the machete being used, Ndudim was seeing Ogechi off, when Peace suddenly jumped out from the bush and, as usual, pounced on Ndudim. He beat him up.The following morning, Peace saw Ndudim and this time, attacked him with a stick. Unfortunately, Peace attacked Ndudim in the presence of his brother.The brother ran and returned with a machete and attacked Peace.”The machete cuts were so severe that Peace was rushed to the hospital, where his injuries were stitched to save him from bleeding to death.Ndudim, who was attacked with a stick, was also taken to the hospital. Doctors said he has internal bleeding and that the blood would have to be sucked out to save his life.Family members of Ndudim were said to have been spending a lot of money on medical bills since the incident.

The matter was later reported to the police and investigation started.

The incident between Peace and Ndudim spread after a closed group, ‘Amaoba My Home For Life, shared it on its wall. Some of the group members, who are from the same community as Peace and Ndudim, have expressed shock and revulsion over the bloody incident. Mazi Emeka Ijiomah was the first person to share the post.

He said:
“Sometimes I wonder how we came to this point. We used to be a safe community.Today, I’m not really sure what to say. This boy (Peace) was cut in this form by a fellow Amaoba boy and the reason behind all the fighting is a girl! A girl none of them has paid a bride price.Our norms and values as a community are failing us because we no more teach our children that we have a power, ‘Erim,’ in place to checkmate the spilling of blood of a fellow brother.“The church might say that things like Erim are ineffective, but the same pastor wouldn’t attempt to spill blood because he too fears Erim.Why should our people fight to this level over an unnecessary issue? We should begin to educate our children about our norms and values. Erim is real and whosoever thinks he or she will spill blood without atonement is joking.Let the family of these boys do the necessary thing before they put a lot of people in danger.” Orji Queeneth said:
“The young man is alive. He is receiving treatment at FMC Umuahia.
He saw his former lover with another guy and beat the guy up. He did it on the first and second day.
On the third day, the new guy was fully prepared for him. He still went ahead to beat him up. The new guy retaliated.”Onochie Mark noted:
“Peace got what he asked for; how can you date a girl and after breaking up with her, you think that other guys won’t date her as well?He always beats her whenever he sees her with other guys. I think he deserves it.” H/T - NewTelegraphonline