Brad Pitt has compared his split from Angelina Jolie to 'a death' and admits his heavy drinking became a problem in his marriage.

Jolie stunned the world in August 2016 when she filed for divorce following an alleged altercation on a private jet between the actor and their 15-year-old son, Maddox. 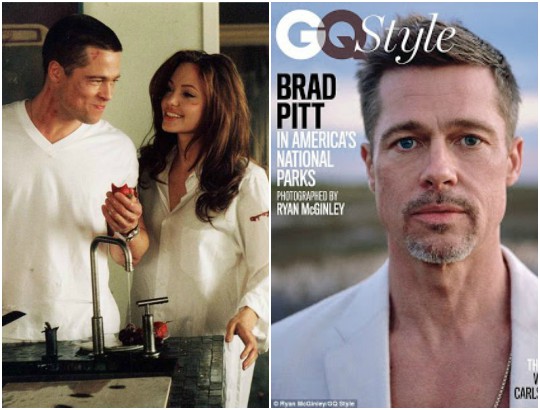 Now in his first interview about the shock separation, he admits that he blames himself for the marriage crumbling, conceding:
'I hit the lottery and I still would waste my time on those hollow pursuits.'
He told GQ Style magazine: (The split was) self-inficted... If you love someone, set them free. Now I know what it means, by feeling it.


'It means to love without ownership. It means expecting nothing in return. It doesn't mean f*** all to me until, you know. Until you live it.'
When asked if the last few months had felt like he was grieving a death, he curtly replied: 'Yeah.'

The Fight Club star - who noticeably looks much trimmer in the three cover shots - reveals he has cut out alcohol from his life, admitting it had become a 'problem' during his life with Angelina.

'I mean, we have a winery. I enjoy wine very, very much, but I just ran it to the ground. I had to step away for a minute,' he continued. 'And truthfully I could drink a Russian under the table with his own vodka. I was a professional. I was good,' before conceding that he didn't 'want to live that way anymore. 'But me, personally, I can’t remember a day since I got out of college when I wasn’t boozing or had a spliff, or something.
'I mean I stopped everything except boozing when I started my family. But even this last year, you know —things I wasn’t dealing with. I was boozing too much. It’s just become a problem.'
The 53-year-old actor graced the cover of US GQ Style magazine, the first time he has appeared on the cover of any magazine since his split.

The actor appeared on three different covers for the magazine, gazing soulfully at the camera in each one.

He then sits down for a personal interview, which GQ describes as a 'raw and reflective' conversation about 'love, loss, fatherhood, and how to move forward after things fall apart.'

But it does appear as if things are improving between him and his family as it was reported last week that his six children stayed with him at his Los Feliz home in Los Angeles for the first time in seven months.

The Fury star welcomed Maddox, 15, Pax, 13, Zahara, 12, Shiloh, 10, and eight-year-old twins, Vivienne and Knox along with their two nannies for the weekend.

The 53-year-old and the kids 'had a family dinner around the table, which Brad truly enjoyed,' a source told In Touch Weekly last Wednesday.

'It was total chaos, as the kids all wanted to eat different things, and Brad was grateful to have a chef who accommodated all of their requests,' the insider dished.

Angelina, 41, insisted the nannies joined the children, according to the insider, 'because she is the one with sole physical custody of the children. Brad has no need to have his own nannies right now.' It was also recommended by the family therapist.