Following the recent clamp down on street begging in Kaduna State, the blind among this category of vulnerable Nigerians have taken their case to God through the hosting of a special prayer session against their oppressor.

The prayer attended by hundreds of these disabled persons, including blind women and children, was organized under the auspice of Arewa Freedom of the Blind Association. 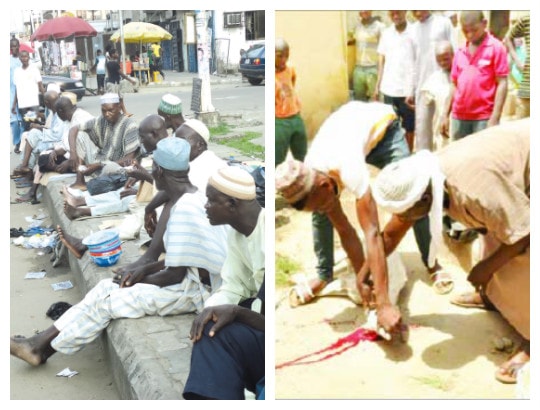 The session was held at Darika Central Mosque, Ungwan Rimi, Kaduna, where they prayed God to touch the hearts of their oppressors in power and authority.

Indeed, the prayer seemed to have been specially arranged as they were spotted slaughtering a “pregnant” sheep before the commencement of the prayers.

The group’s spokesman, Mukhtar Saleh, regretted that the people in power were oppressing their
members, saying that the state government did not consider their condition before forcefully evacuating them from the streets where they beg for their daily bread.

He lamented that nobody wished to be blind in the first place, insisting that those who were not blind should therefore not maltreat those who were blind:
“It was not because they or their relatives had sinned against God that they were made to suffer blindness. Their condition was willed by God Almighty, who created all men both male and female.”The spokesman also criticized the unfair treatment meted out on their members in Kano State, whereby they were fined and punished for going out to look for their survival. He accused the state government of approving a fine of N30,000 for any physically challenged person found on the streets begging:
“A public spirited individual came out and vowed to pay these fines on their behalf and the government stopped asking for fines and adopted punishment as an alternative.”He held that in Kaduna State, it was no longer news that their members and other physically challenged persons were being rounded up from the streets and bundled to camps, where they were abandoned in degradable conditions:
“The camp is there for you to confirm at Gazera Village, near Makarfi town in Makarfi Local Government Area. Almighty Allah, only You can fight for those that have no strength of their own. Help us and fight on our behalf.” They all chorused in one of their prayer sessions shortly before they dispersed.However, the Nigerian Security and Civil Defence Corps (NSCDC), in collaboration with other agencies including Ministry of Women Affairs and Social Development has been evacuating destitute for possible rehabilitation at Makarfi Destitute Camp.

The Commandant of the NSCDC, Modu Bunu, while briefing personnel of the command before their deployment, urged them to ensure high discipline, diligence and synergy in the discharge of their duties.

He pointed out that the operatives alongside others are required to assist in evacuating destitute from the metropolis and convey them to Kakuri from where they will be moved to the camp.

He explained that the decision was taken during the state’s Security Council meetings held on March 7 and 14. He said it was resolved at both meetings that the NSCDC and the police should evacuate the destitute and keep them in their (Police) custody for onward transportation to the camp where state government had concluded arrangements for their feeding.