A community leader and Lagos State Public relations officer, Ishola Slumdweller Agbodemun has narrated his bitter ordeal in the hands of some Lagos State security operatives.

The  resident of Jones street Ebute Metta, Lagos Mainland local government area who with the affirmation of the photos below is still recuperating from the injuries sustained from the incident, took to his facebook timeline to share his bitter experience. 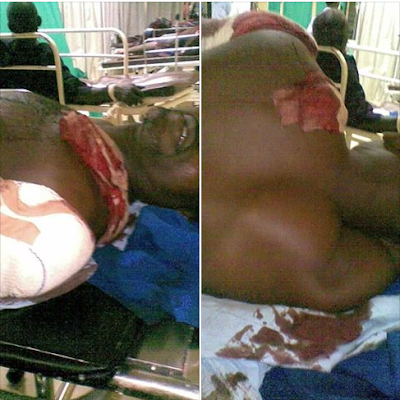 He wrote "SECURITY OFFICERS OR HOODLUMS ?
03/03/2017-yesterday Friday
My own Personal Experience from acclaimed Nigeria security operatives
I was at my house about 6:00pm


on March 3rd when I heard that members of Lagos SARS were arresting people in my community. Jones street Ebute Metta Lagos Mainland local government Area.
As a resident, leader of the community and a member of a community security groups (VIGILANTE Lagos State Public relations officers and strong P. C. R. C Area C Command , I met the SARS officers to know the reasons behind the arrest - this is to know if I could help them identify anyone peradventure if it's a criminal case.

Instead of receiving answers to my questions, I was shot at 3 times. They left with 6 members of the community. It was later heard that each person would be released with a bail of over a hundred thousand naira each from one supl Biola.

The bone of contention is this....... Are security officers supposed to act like HOODLUMS or KIDNAPPERS ? How would you shot at an individual who only seeks to know the truth? How could it be ascertained they were security officers if they cannot talk about their mission? They could have been hoodlums or kidnappers disguised as security officers to take people unlawfully and request for a huge amount of money for them to be released.

Again, when has it become a crime to speak as a Nigerian? Why do I have to be shot by those who are supposed to ensure I'm safe and secured just because I asked a question? How can I categorically say these ones are security officers and not hoodlums?  These are the mode of operations of Boko Haram sect, herdsmen and kidnappers, but I'm still amazed security operatives could do that.

Just as I am happy that I haven't bid the world farewell, I still cannot recover from the shock of the quagmire we are in this country

If we can all recollect 2010 neck gun shot and injury still fresh in my memory by The same Nigeria Police officers.

Hmmm where do we go from here?
Taoreed pay 100k before is was released while the other five innocent poor Residents are still cool their head in Lagos state SARS cell. 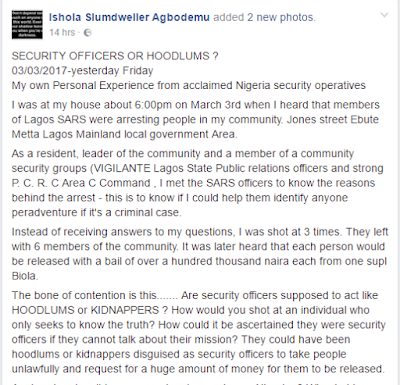 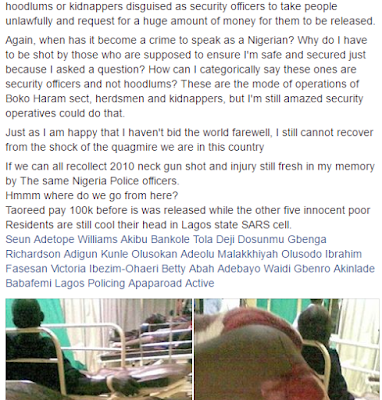