Police Sergeant, Others Arrested For Attempting To Steal Baby From Hospital


The police have paraded a sergeant, Iseke Koradam, who was arrested at a hospital in Oke – Uvuru in Aboh, Mbaise Local Government Area while attempting to steal a baby.

The Imo State Police Commissioner, Taiwo Lakanu, said Mr. Koradam and his gang had confessed and would be charged to court soon. 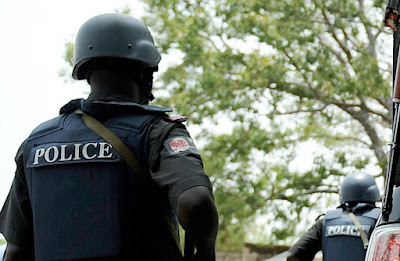 “On February 22, Rev. Erancisco Emeh, Chinedu Ubah (30) and Ifeoma Joseph (27) were arrested at Orient Hospital in Oke-Uvuru Aboh Mbaise Local Government while trying to steal a baby from the hospital.


“They have since confessed to the crime, alleging that they planned to steal the baby in connivance with a police sergeant, Iseke Koradam.

“The suspects have made useful statements and are helping the police in its investigation.”

The police chief also announced the arrest of four men suspected to have killed a man said to be an American veteran soldier, Oscar Okebata.

The victim was robbed and murdered in Atta, Ikeduru Local Government Area of Imo State on January 12.

According to him, the suspects were apprehended with evidence showing they murdered the veteran, who was in the state for the Yuletide.

The police commissioner said the suspects allegedly sold the victim’s Samsung Note 5 phone at N125,000, which led to their arrest.

“The suspects were arrested in connection with the robbery and murder of Oscar Okebata of Achi Mbieri in Mbaitoli Local Government Area, an American veteran solider who returned home for the Yuletide.

“The victim’s Samsung Note 5 phone was sold at N125,000, leading to the arrest of the suspected masterminds.”

According to the police chief, the command on February 8 also arrested members of a notorious robbery syndicate who trailed their victim after he had withdrawn some money from a bank at Amakohia in Owerri North Local Government Area.

“They were apprehended as they used a master key to damage the driver’s side door of the victim’s black Toyota Land Cruiser in an attempt to remove the money from the car.

“The suspects are Chibuzo Amankwe, Prince Igbo Williams, Enwereazu Ibe and Uchenna Ononugbo all of Agwa in Oguta Local Government.

“They are helping the police in their investigation.

“Also on February 14, following a tip-off, operatives arrested Okwudiri Aluo (35) of Obiti in Ohaji Local Government while on a robbery operation with his gang members”, added the police chief.