An 11-Month old Baby (name withheld) is currently battling between life and death after She was raped by a 27-year-old Uncle, identified as Ibrahim, in Ijebu Igbo area of Ogun state.

It was gathered that the mother of the litttle child had dropped her off with the Ibrahim who lives next door in a bid to get some food stuffs in the nearby market. Witnesses further disclosed that Ibrahim used his fingers to tamper with the child’s sexual organs while she was in a deep slumber before trying to penetrate with his manhood. (Graphic photo, 18+ after the cut) 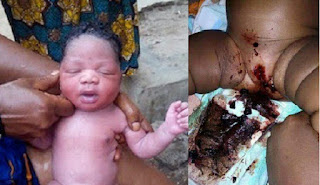 “It was at this point that we shouted an that attracted the attention of other neighbors”, and eye witness said
Further details are still sketchy. However, Ibrahim has been arrested and is currently helping the police with investigations.