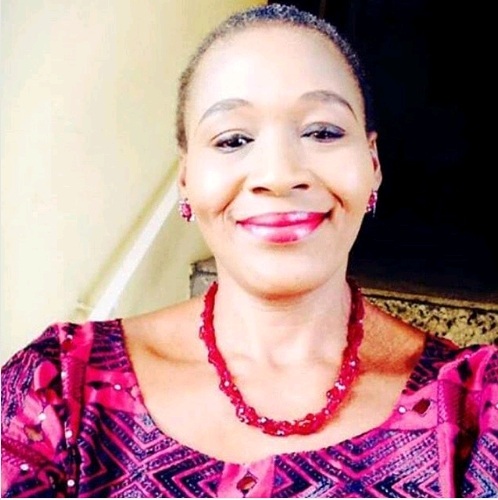 He shared the above photo and wrote;

"💥🔥D A N G E R🔥💥
-
**P U B L I C W A R N I N G**
-
BEWARE INSANE WOMAN ON THE LOOSE!
-
YOU HAVE BEEN WARNED!!!
-
@hnnafrica IS DEADLY
-
But come to think of it, Its not entirely bad to be insane.
-
Albert Einstein smoked butts of cigarettes he picked from the floor, was once scribbling a mathematical equation on a car in traffic, and started running after the car scribbling away as it drove off. He divorced his wife Mavic, to marry his cousin Elsa. He was totally MAD! Yet despite all this, he changed the world of physics with his relativity theory.
-
Howard Hughes would lock himself in a room for months on end, naked, not letting anyone come in, urinating in bottles not having his bath in weeks, yet he was the richest man in the world, he was a test pilot, who owned his own airline and flew many test flights, crashing badly in one!Howard was a complete lunatic, yet he changed the face of aviation and entrepreneurship.
-
Galilei Galileo was considered mad for daring to declare that the world round, and was made to publicly denounce this 'blasphemous' statement! It took normal 'sane' people about 100 years to catch up with that mad man!
-
Isaac Newton was another mad person who was born on the same day the other mad man, Galileo, died. Although renowned for his unpredictable and irrational behavior, Newton was single-handedly responsible for laying the the groundwork in classical mechanics, optics, and even mathematics.
-
Vincent van Gogh was an absolute maniac, out of anger or frustration, it is alleged that he once cut off his own ear. Not one sane person bought his paintings while alive, yet today his portrait of Dr. Gachet sold for $82,500,000 the equivalent of more than 8 of those $9.8 million NNPC boss Yakubu safes, is what sane people paid for a single drawing of a mad person.
-
Samuel Morse, the man who invented both the telegraph and the morse code was a confirmed nutter, yet so many sane people enjoyed his work.
-
Maybe our 'sanity' is what is restricting our breakthrough. Perhaps, a little madness is what we need!
Our sanity took us into recession, maybe insanity can invent something that will bring us out! ~FRZ"