The chief driver with the Nigeria Television Authority, Mr. Eze Wilson, who was kidnapped by gunmen, said he was kept and fed with noodles in a toilet for over two weeks by his abductors. 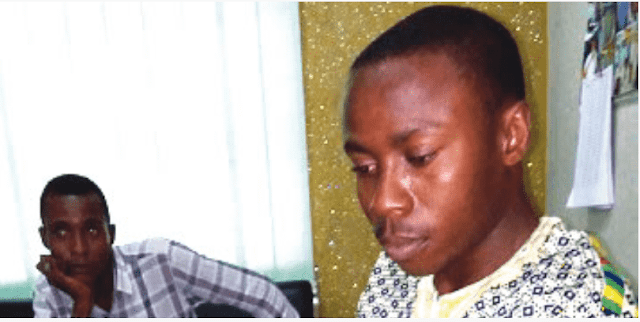 Wilson was kidnapped on January 20, 2017 along Apara Link road in Obio/Akpor Local Government Area of Rivers State while driving home from his office in a Hyundai car belonging to his boss.

Narrating how he was abducted to Southern City News, Wilson said the hoodlums overtook him and
two of them forcefully entered his car.

He said on Friday that his abductors ordered him to drive through a path to a place where he was finally held hostage for many days.

Explaining that his hands were initially tied by his abductors, Wilson stated that the bandits tried to force him to smoke Indian hemp.

The NTA employee said he stood his ground that he had never smoked before and would not be able to withstand India hemp.
“I was beaten on several occasions, especially on the first day before they now realised that I was a driver and not the owner of the Hyundai car they saw me drive. They told me they did not know I was a driver and kept me in a toilet throughout my stay there. They always fed me with Indomie (noodles). They gave me yam and garri on few occasions.“I ate whatever food they brought to me in the toilet; I was also using the toilet whenever I was pressed and slept there at night. They threatened to cut off my head and place it in front of our gate. That actually frightened me, but I had hope in God that I would be out of the place.“One of them, a graduate, told me that he decided to go into kidnapping when police seized his taxi cab, refused to release it, and left him with nothing to earn a living,” Eze added.Speaking further, the victim explained that the hostage takers later brought an electric fan into the toilet to reduce the heat inside the place.

A statement by the state Police Command indicated that Wilson and two others, who were kidnapped on January 20, 2017, were rescued on Friday, February 10, 2017 after a gun duel with the abductors.

The statement signed by the Public Relations Officer of the Command, Mr. Nnamdi Omoni, identified the other two victims as Timi Endure (Female) and Nasi Fatima (female).