A 70 year old herbalist, Simon Odo Okoro a.k.a Onuwa, has divorced his 57 wives. The herbalist who vowed not to marry again has accused some of his children of allegedly sleeping with some of them. 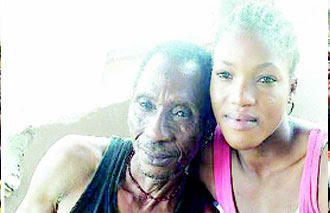 With one of his daughters
However, Onuwa, who calls himself King of Satan broke his vow not marry again by quickly remarrying one of the youngest of his divorced wives, an 18 year old Chidinma.

Onuwa said that the new wife whom he divorced pleaded with him to marry her so that she could take care of him as an old man.
“The girl who lured me to marry her returned from the United States. She told me to marry her so that she would take care of me as an old man. She is from Enugu State. However, a month after the marriage was consummated, she told me to sack the youngest one, Chidinma and I became furious with her because that was not why I married her. I beat her and she left,” he said.
On the allegation that some of his children (names withheld) not only slept with some of his wives but planned to kill him, he said that he would disown any of his sons involved in criminal activities.

Onuwa married the 57th wife in November 2015 and vowed not to marry again, having had a fair share of women in his life.

Chidinma was married from Okutu, in Nsukka Local Government Area of Enugu State. Odo, also known variously as Onuwa, King Solomon of Africa or King of Satan had altogether been married to 69 women but some of them had earlier died. Augustina Odo (nee Asogwa) and Virginia, nee Mogbo from Oraifite were among the dead ones.

However, Odo spoke in an interview with the South East Voice at his palatial home at Aji, Enugu Ezike in Igboeze North Local Government Area of Enugu State.  Onuwa who was armed with an Onward note book where names of his wives and over 200 children were listed according to their dates of birth said that his first son, Emeka was born on December 15, 1969.

“I was born in 1947 on the day they had an eclipse of the sun and the moon. There was darkness in the afternoon on the day I was born."