Tragedy struck at Eke-Obollo, in the Isiala Mbano Local Government Area of Imo State after a middle-aged woman, Chinonso Azubuike, in a bid to separate two fighters, set her son, Chimaobi Azubuike, aged three, and one seven-year-old Chidalu Onyeka on fire. 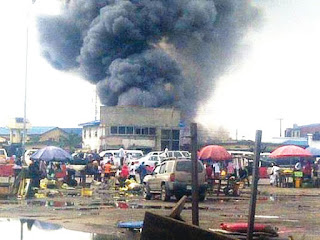 File photo
Sources in the grieving community told PUNCH on Saturday that the woman had been admitted in a public hospital in Owerri, the state capital, owing to the damages done to her body by the raging fire.

The woman, who is married to one Oliver, who hails from Umuchieze – Obollo, poured a gallon of petrol on her husband and sister-in-law, Adanna Onyeka, on Friday, in an attempt to separate them
after they engaged in fisticuffs.

The sources explained further that no sooner had the woman poured the fuel than the entire house was consumed by fire, which reportedly came from a kitchen near the house, where a resident was cooking.

It was gathered that the fire killed Chimaobi and Onyeka, who were together in one of the rooms in the house.

The source said,
“All the efforts made by villagers to put out the fire in order to save the children proved abortive as they died before help could reach them.A native of the community, Collins Osuji, said the woman was also affected by the fire and had been hospitalised.

Osuji said the two adults who were fighting, also sustained burns. He said,
“The policemen, who came on a rescue mission, took the woman and others to a hospital for the injuries they sustained as a result of the fire.”The Police Public Relations Officer in the state, Andrew Enwerem, said an investigation into what transpired had commenced.