Rival Cult Leaders Killed 8 People In Fight Over A Woman


Osun State Police Command has arrested notorious cultists in Osogbo, the state capital and Ilesa, the home town of the state governor, Mr Rauf Aregbesola, over serial murders between August and November this year. 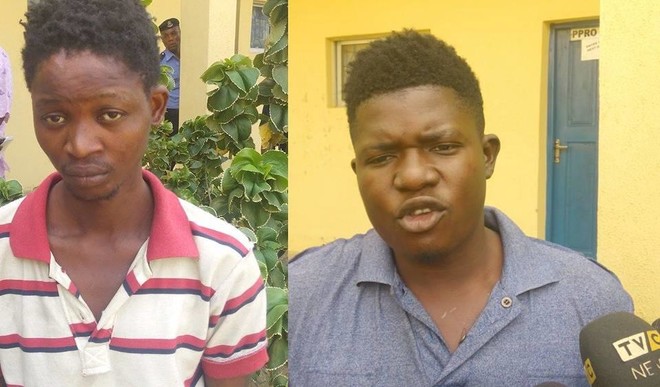 The Commissioner of Police in the state, Fimihan Adeoye told journalists that Mutiu killed a 40-year-old man, Adesina Akinwale at Oke-Oniti area and also killed 21-year-old Adekunle Badmus at Government Technical College Area in Osogbo on 15th of August, 2016.

The Police chief said a 23-year-old  man, Aderemi Adepoju who was attacked by Mutiu at Ayetoro area in Osogbo was still unconscious in the hospital where he is receiving treatment.

In a chat with Small Mutiu, he told Daily Trust correspondent that he killed those individuals mentioned by the CP because they were members of Eiye Confraternity that killed members of his own gang, Axe confraternity.

His words, “We are just on 4-4 now. They dropped (killed) four on our side and we dropped four from their side. It was a battle between my gang, Axe and the Eiye guys. The battle started from our school, Federal Polytechnic, Offa in Kwara State. We were actually fighting over women.”
CP Adeoye said police also arrested a leader of the Eiye Confraternity, Babatunde Oginni popularly known as Bongo for allegedly killing a newspaper agent in Ilesa, Eluyera Saheed on Monday, December 19.

In a chat with Daily Trust correspondent, Oginni confirmed that he is the leader of Eiye Confraternity in Ilesa and that the deceased newspaper agent was also a cultist.

He said the late Eluyera was killed by some cultists from Osogbo who did not take orders from him before they struck in Ilesa.

The Commissioner of police said the suspects would be arraigned in court after completion of investigation and assured that other members of the cult gangs would soon be apprehended.